What is the Pituitary gland?

So your mind is racing and your heart is pounding –
so many questions – so much to take in – where to start?

Lets start with the basics.

A typical dictionary definition of “Pituitary gland” reads something like: The pituitary gland, or hypophysis, is a small ductless gland of the endocrine system that secretes hormones directly into the bloodstream. It is about the size of a pea and is located at the base of the brain in a small, bony cavity covered by a tough and inflexible membrane.

The endocrine system is an integrated system of small organs that involve the release of extracellular signaling molecules known as hormones. The endocrine system is instrumental in regulating metabolism, growth, development and puberty, tissue function, and also plays a part in determining mood. The field of medicine that deals with disorders of endocrine glands is endocrinology, a branch of the wider field of internal medicine.

Endocrine glands regulate your body chemistry by releasing hormones directly in to the blood system, which stimulate or inhibit activity in the target cells. They are like remote-control devices for your body’s many cells and systems. It would be far too complicated to communicate with each cell in the body directly, so instead the brain controls similar types of cells using hormones released in to the blood stream. To give you an example of how this works, imagine your sudden rise in heart rate when danger threatens or an emergency situation arises – this is caused by another ‘remote control’ hormone: adrenaline. This hormone, released by the adrenal gland on top of your kidney, has a very immediate and noticeable effect on your body. The hormones released from the pituitary gland are way less dramatic and not nearly as instantaneous, but work in a similar fashion and are critical to your overall health and well-being. 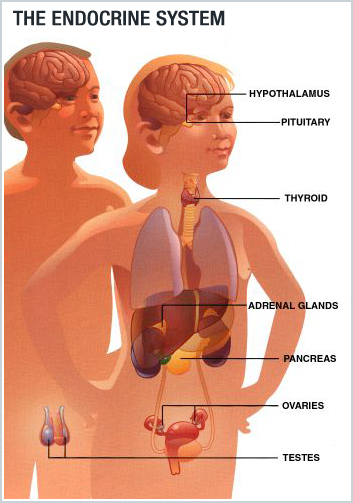 The medical term is hypophysis (from the Greek, “lying under”) which refers to the gland’s position on the underside of the brain. The term “pituitary” is in reference to secretion, but has come to be synonymous with, and easier to say, than “hypophysis”.

The hypothalamus is the bottom part of the brain that connects and communicates with the pituitary gland via nerve fibers. This area of the brain functions as the main control center for the autonomic nervous system by regulating sleep cycles, body temperature, appetite, etc., and that acts as an endocrine gland by producing hormones, including the releasing factors that control the hormonal secretions of the pituitary gland.

Regulating growth hormones are what people commonly associate the pituitary gland with. Too large an amount of these hormones causes giantism, a condition where facial features, hands, etc. become abnormally large. Too little causes dwarfism, where the overall stature of a person is very small. While the pituitary gland is responsible for regulating growth hormones, it also sends signals to the thyroid gland, adrenal glands, ovaries and testes, directing them to produce thyroid hormone, cortisol, estrogen, testosterone, and many more. These hormones have dramatic effects on metabolism, blood pressure, sexuality, reproduction, and other vital body functions, including prolactin for milk production.

The pituitary gland itself is made up of three sections

Each lobe of the pituitary gland produces certain hormones, each with a specific function. Pituitary problems arise when too much or too little of these hormones are produced. When an imbalance occurs, it can lead to more than a dozen disorders of the endocrine system. Deficiency of thyroid hormone, adrenal cortical hormone (cortisol) or antidiuretic hormone (vasopressin) is rapidly life-threatening. In patients with abnormalities of the other hormones, quality of life is significantly compromised.

So you can see why the pituitary gland is so important!

What causes the pituitary to malfunction?

Tumors (typically benign), inflammation, infections and injury can cause the gland to malfunction, as well as metastasis or spread of other tumors to the pituitary (but this is very rare). Radiation therapy to the brain can also cause normal pituitary cells to malfunction.

The problem with pituitary disorders is that they are hard to diagnose because they can cause a wide spectrum of symptoms, and are often confused with other disorders. Due to its location near the brain, symptoms may appear both hormonal and neurological, making diagnosis of pituitary disease difficult. Diagnosis is dependent on analyzing symptoms, signs on examination, blood tests and MRI findings as direct access to the pituitary can only be reached via surgery. Too often pituitary gland dysfunction is not suspect, and tumors can go undetected.

So, why do we care? Unfortunately, research shows one out of every five people worldwide has a pituitary tumor. That is a pretty alarming statistic. We do not know why tumors are so prevalent because before October of 2002 funding for benign brain tumor research was virtually nonexistent. What we need to do now is raise awareness of pituitary disorders so that they are not misdiganosed, allowing pituitary tumors going undetected.

What is a pituitary Tumor?

A pituitary tumor is an abnormal growth of pituitary cells. Pituitary tumors can produce specific hormones, such as prolactin (causing infertility, decreased libido, and osteoporosis), growth hormone (causing acromegaly), ACTH (causing Cushing’s), TSH (causing hypothyroidism), or be nonfunctional and not produce hormones at all. These tumors behave according to their cell of origin and are named for the specific cell type affected. For example, if a tumor originates in a prolactin producing cell, the patient develops a prolactinoma-a prolactin secreting pituitary tumor that is common and usually treatable. High prolactin levels suppress production of the pituitary hormones (luteinizing hormone and follicle stimulating hormone) that stimulate production of estrogen or testosterone. Men with these tumors have low testosterone levels and lose their sex drive and eventually their masculine characteristics such as facial hair, muscle mass, develop erectile dysfunction and low sperm count. Women with prolactin producing tumors often do not ovulate, experience low estrogen levels, and cease having menstrual periods. In both cases, patients with low sex hormones develop osteoporosis. It is important to remember that most pituitary tumors are benign and cancer is very rare. They have variable patterns of growth and affect different people in vastly different ways. Some are small and incidental, while others are small but cause hormone excess. Others may be rapidly growing mass lesions. The point is they need early detection and treatment.

Enough doom and gloom – typically if diagnosed early enough the prognosis for recovery from pituitary tumors is excellent. If not, some tumors can grow into much bigger problems, ranging from discomfort to death.
So early detection is key.

Why is early diagnosis such a problem?

In a significant minority of patients diagnosis is not made until the individual has developed debilitating or life-threatening symptoms of heart disease or adrenal (uncommon), gonadal and/or thyroid insufficiency. Even in the 21st century death from a large pituitary tumor or hormonal deficiency still occurs, albeit rarely. Early diagnosis is usually a reflection of a high index of suspicion on the part of a physician. Unfortunately, many doctors have been taught that pituitary disease is rare, so it is not at the forefront of their list of possible diagnoses. PNA is out to change all of that.

Which brings us back to you – now wondering how can you get properly diagnosed. If you are suspicious of pituitary disease you should get blood and urinary hormone levels checked and, if indicated, a brain MRI, keeping in mind that microadenomas may not show up on the x-rays. Combinations of three or more of the following may suggest the possibility of a pituitary tumor: sexual dysfunction, depression, galactorrhea, infertility, growth problems, osteoporosis, obesity (specifically central), severe vision problems, easy bruising, aching joints, carpel tunnel syndrome, disrupted menses, early menopause, muscle weakness, fatigue. So if you suspect pituitary dysfunction you should get tested at a hospital with a Neuroendocrine Unit or Pituitary Testing Facility, preferably both. Pituitary blood tests can be very complicated and must be performed by specially trained technicians who can conduct dynamic hormone testing and precisely-timed blood sampling, administer testing agents, and have special expertise in measuring pituitary hormones. Its not a simple process, which is why problems often go undetected.

If a tumor is found, what are the next steps?

It depends on the type of tumor and how far it has invaded into the brain, as well as the patient’s age and overall health. In general three kinds of treatment are used: surgery (physically removing the tumor during an operation), radiation therapy (using high-dose x-rays/proton beams to kill tumor cells) and drug therapy to shrink and sometimes eradicate the tumor. Drugs can also block the pituitary gland from making too much hormone. Surgery is a common treatment, and it is almost always successful if performed by a skilled and specialized neurosurgeon. The smaller the tumor, the greater the chance the surgery will be successful. Large tumors increase the risk of surgery and are generally associated with a lower probability of cure.
Early diagnosis and treatment is the key.

Post-surgery recovery in most patients is short. Patients often report immediate relief from symptoms after Transphenoidal Hypophysectomy and little pain. Some leave the hospital the same day!

Radiation therapy may be used if medication and surgery fails to control the tumor. Radiation therapy uses high-energy x-rays to kill cancer cells and abnormal pituitary cells and shrink tumors. The type and size of tumor dictate treatment, and there are many. There are more than a dozen very different disorders that result from pituitary tumors and disease.

OK so now maybe some of that adrenaline is in your system causing a bit of panic – so how can you tell if you have a problem?

If a tumor forms in an ACTH secreting pituitary cell, it could result in the overproduction of cortisol (Cushing’s Disease) or the underproduction of cortisol (adrenal insufficiency, often referred to as Secondary Addison’s Disease). Cushing’s is a condition characterized by excessive fat accumulation in central parts of the body (obesity, including a rounded or fat-filled face), diabetes, hypertension, a low serum potassium, thinning and bruising of skin, and osteoporosis.

Symptoms of adrenal insufficiency include dehydration, low blood pressure and sodium level, and excessive weight loss. Primary Addison’s Disease is caused when the adrenal glands fail to respond to directions from the pituitary and hypothalamus.

If the tumor forms in a growth hormone producing cell, it can overproduce growth hormone. Tumors that form from growth hormone producing cells cause two different clinical pictures. If they occur in children before the growth plates in long bones have closed, excessive growth hormone will cause gigantism. If the growth hormone excess occurs during adulthood there is excessive enlargement of the hands, feet, and jaw, as well as soft tissue swelling of many tissues (acromegaly). Acromegaly is associated with an increased probability of developing diabetes mellitus, heart attack, hypertension, and certain types of cancer including malignancy of the colon. Most commonly the facial changes develop subtly and may not be noticed by the patient or his/her family.

OK, what happens after a tumor is removed or treated? There may be permanent loss of some or all pituitary hormones, an imbalance that can be treated with Hormone Replacement Therapy. HRT can replace thyroid, growth, testosterone, or adrenal hormones when those made by the pituitary to stimulate the endocrine glands are no longer produced. It can be lifesaving therapy for the many millions of patients who need to replace hormones they no longer make. Which is to say there is quality of life after treatment!

So now you know why the pituitary gland is so important, and why if you suspect pituitary dysfunction you should have yourself checked specifically for it.

Check out our new educational tools!

Our print quality brochures are now available for download.